To make your own straw skep you will need:
* half a bale of straw (from a thatcher)
* 5mm ratten strips to hold the straw together
* hollow spike (170 mm) from Amazon (used to be called 'Swedish fids')
* traditionally a cow's horn was used to feed the straw into the bundle making the skep, but this method uses a copper pipe 'reducer',

* water spray/mister to keep the straw and cane moist.

The skep is made from a bundle of individual thatching straws. Pick up a handfull of straw, just enough to fill the centre of the reducer:

The straws are given a slight twist and then parts of the bundle are attached to other parts by the use of ratten strips. As construction continues more straw is fed into the open end of the bundle so that the bundle does not run out.

The straw and strips are regularly misted by the sprayer hich keeps them flexible. A ratten strip is about ten foot long, but it is a good idea to start with a half length - the start is the trickiest part. Wind the ratten around the straw and 'catch' the end of the ratten under a couple of subsequent turns. Bend the straw and hold it by wrapping in ratten. To secure the straw, push the spike 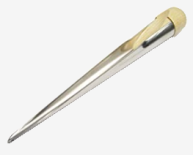 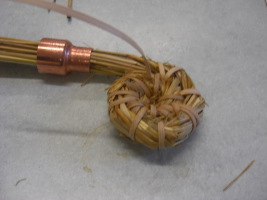 Continue building the flat circular base Feed new straw into the middle of the wide end of the reducer about 1 straw every turn of ratten, but so that the bundle remains a constant thickness: 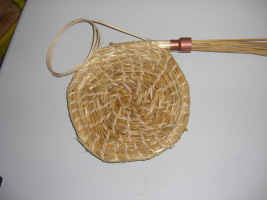 As you near the end of a ratten, join it to the new one using a sheet bend (or weaver's knot) try to make the knot rest on the inside of the skep.

The final diameter will be 350mm but you will want to start to turn the edge over as you get nearer to that. To join at an angle simply insert the spike at the required angle and continue.

When you get to the full width make sure that you build straight and continue until you have a height of 300 mm. This should give you the required space for a colony.

Finish by stopping inserting straw and continue wrapping ratten until you have the reuired rim to hold the skep: 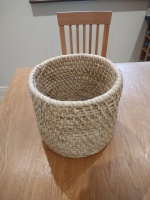