A Year in the Hive

In January the bees just hang out. Literally. They do not hibernate but one group hang onto the top of the hive frames, the next group hang from the first and so on. They form a ball of bees somewhere towards the middle of the hive. At this time there would be 10 - 15,000 workers (all female), and 1 queen. The colony is totally dependent on the queen. If she dies over winter the colony will ultimately collapse and die. The bee keeper will have worked hard to make sure that the colony has all they need and the queen's attendants will make sure that her needs are met, they even feed her. It is too cold outside to fly; the only exception is what are called cleansing flights - even for bees, when you have to go you have to go. 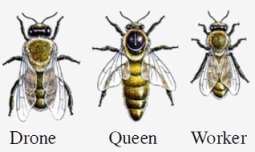 And so the month passes. The bees break open the stored honey from the hexagonal cells in which it is stored and pass the food around. As with all things that bees do, the organisation and cooperation is mindstaggeringly beautiful, and the food is distributed evenly around all the bees without problem.

February is likely to be similar. Perhaps March too. It all depends on the temperature. Bees fly when the temperature gets to 13 or 14 degrees Celsius. On a warm day when the temperature is right the bees will rush down to the entrance, hook their rear wings to their front wings and launch themselves into the light. They will rise quickly and start to circle the hive. This is what beekeepers call the familiarisation flight. For most of a flight a bee will navigate by the sun (they can see ultra-violet light so they can tell where the sun is even on a totally overcast day), and only when they return to the hive will they use the memory of how the hive is situated to get home.

The bees segregate themselves into scouts, foragers, water carriers, guards, nurse bees (for the young larvae) and queen attendants depending on the needs of the colony. This is one of the miracles of bee organisation. Over winter there are about 10 - 15,000 bees in a hive, but in the summer this climbs to as much as 60,000. 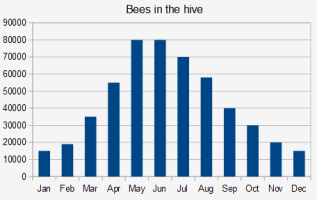 In order for there to be enough bees to collect the nectar and pollen, the queen must lay enough eggs at the right time so that bees are available. A bee usually does hive duties for the first three weeks of its life which means that six weeks before the weather reaches flying temperature the queen has to start laying many more eggs. This increase in the rate of egg laying is prompted by the gradual increase in nectar flow from plants as the temperature rises with the onset of Spring.

Male bees (drones) are not kept in the hive over the winter. Their only job is to mate with queens; they don't even feed themselves (although they can). So they die in the autumn and new drones are born in the spring.

May and June arrive. Scouts fly and on their return, those who have found nectar become the centre of attention. They perform what is called the waggle dance. This indicates in what direction, relative to the sun, the nectar was found and at what distance. The foragers then stream out of the hive to collect the bounty.

When they arrive at the flowers they suck the nectar into their honey sacs. The flowers are so arranged that in getting to the nectar the bees brush against the  pollen which then sticks to their hairy bodies. The bees also collect other pollen and store it in their pollen baskets on their rear legs  Finally, laden and sated, the bees fly off and make their way home. They land near the entrance to their hive and the guard bees smell them to check that they are not robbers. The bees then unload the pollen and nectar for others to store and they are back off for more.

The bees fly back and forth collecting stores for the hive. These Summer bees do not live long, five to six weeks on average, after which they fall exhausted and die. This means that the queen must lay eggs at an amazing rate. To maintain a hive of 60,000 bees the queen must lay around 1500 eggs per day, about one per minute continuously.

This carries on throughout the summer. The source of nectar and pollen changes as plants come into flower or finish. As the season turns, the weather cools and the queen reduces her laying rate. By mid august it is nearly all over. The drones are either killed or driven out of the hive. The egg-laying rate reduces so that as Autumn bites the colony has reduced to about 10 - 15,000 bees. These are winter bees and longer living. Their job is to keep going through the winter until the following Spring. They eat the honey that has been produced during the year, or if some beekeeper has stolen it the sugar substitute that he has left in its place.

In September the colony starts to form its winter cluster around the queen. They use stores and by flexing their wing muscles they keep the temperature warm inside the hive. This continues for the rest of the year.

The queen lives a completely different life to the workers. She is looked after by attendants and is fed and cared for by them. Her job is simply to lay eggs. She might live for up to five years, but usually only for two to three years and at the end of this time she tires and cannot lay sufficient eggs. The workers then build queen cells and eggs laid in those cells are fed with royal jelly which causes the larvae to develop into young queens.

When the first of these emerges, her first action is to go around killing all the other new queens, usually while they are still in their cells. She then goes out on her nuptial flight. She heads for a drone congregation area where she mates with from 12 to 20 drones, for each of which, alas, it is a terminal affair! She stores the sperm in her body and returns to the hive for a lifetime of egg laying.

Each egg is laid upright at the bottom of a hexagonal cell in one of the frames in the brood box. For the first three days the egg turns so that it is horizontal and then hatches into a larva. The larvae are fed by the nurse bees. After 5 days (7 for drones) the larva is sealed into the cell when it it then pupates, transforming into a fully adult bee. Female workers need a total of 21 days from the time the egg is laid to emerge fully formed, while drones take 24 days. A new queen takes only 16 days in total.

When a colony of bees becomes strong and has filled its hive, it often then makes a decision to swarm. This is how colonies of bees reproduce. Half the colony leaves, splitting the colony into two. The process is that a new queen cell is made and filled, and when it is capped the old queen, along with a number of the workers, fly off in a large and noisy swarm. Some people feel threatened by swarms but they are just a group of creatures looking for a new home and if you don't trouble them they don't trouble you.

The swarm don't initially fly very far. They find something on which to rest while they decide where to go.

Once they are settled, scouts go off looking for suitable homes. This is the point at which people often contact beekeepers. It is generally much better for a beekeeper to take the swarm rather than leave it to its own devices, because it may end up in a currently unlit chimney or in a porch entrance or somewhere from where they cannot easily be removed.

Once settled, both queens are encouraged by the workers to restore both colonies to full strength. One has become two.