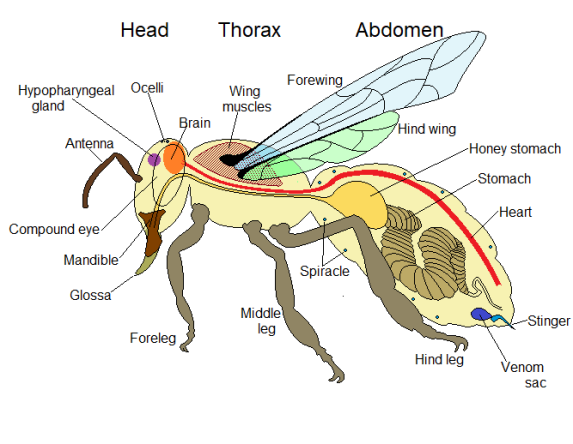 Antenna - are the main sensory organs, providing information on touch, smell, taste and hearing. There are 3000 odour recptors on each antenna of a worker bee, giving them an extremely well-developed sense of smell.

Brain - bees have excellent learning abilities. Their brains processes information used in navigation and communication as well as memory.

Compound eye - A compound eye is made up of many eye units. Each unit takes in a separate image and transfers the information to the brain where it is pieced together into a single image.

Glossa - is a long cylindrical "tongue" which can be extended and dipped into nectar.

Heart - unlike mammals, honey bees and insects have an open circulatory system, meaning their blood is not contained within tubes like veins or arteries. The blood is free-flowing throughout the body cavity and is pumped via the heart. The heart is the structure in red, and acts like a pumping leaky tube to help move the blood through the body.

Honey stomach - A storage sac used to carry nectar back to the hive. It is an extension of the oesophagus with a valve at its end known as the proventriculus which prevents ectar from entering the ventriculus, or stomach, (unless needed).

Hypopharyngeal gland - used in the production of brood food which, together with the Mandibular glands, produce royal jelly for feeding queen bee larvae.

Mandibles - are mouthparts used to manipulate solid substances and for fighting (defence).

Ocelli - are the simple eyes as opposed to compound eyes. Bees have 2 large compound eyes and 3 ocelli. Compound eyes have poor image resolution, but possess a very large view angle and the ability to detect fast movement. Ocelli provide information for the bee on light intensity; bees can see ultra-violet light, so they can navigate using the sun even on very cloudy days.

Spiracle - the breathing system in bees is a series of hollow tubes connected to air sacs in the body. The openings of these hollow tubes are called spiracles.

Sting - punctures the skin and pumps venom into the wound. In worker bees the sting has a barbed end. Once pushed into the skin of a mammal the sting cannot be withdrawn and the sting is ripped out of the bee. The venom sac will remain with the sting. Queen bees have a longer sting with smaller barbs. Drones (males) do not have a sting; the sting is an adaption of the female's ovipositor.

Stomach - unlike the honey stomach, the regular stomach (Ventriculus) is used to digest food for the bee. The processed food passes through the intestines and then out.

Wing muscles - bees beat their wings 230 times a second! Each wing consists of a fore and rear wing and is powered by two pairs of large indirect muscles. The two pairs of wings are coupled together by a row of hooks (hamuli) on each hind wing that grip in a groove that exists on the rear edge of the fore wing.The driving force results from a propeller-like twist given to each wing during the upstroke and the down-stroke. Seven more pairs of small muscles can make slight variations in the actual angles of the wings to cause the bee to hover, moves forward or turn. When bees need to lift heavy cargo (nectar and pollen), they don’t flap their wings faster – they stretch out their wing stroke.