The Parts of a Hive

Inside a hive it is dark and warm. The bees don't mind the dark and they need the warmth to raise their young. A modern beehive is designed to mimic, as economically as possible, the conditions found in "the wild".

The hive consists of two major parts; a brood box for holding eggs, larvae and pupae and a super (Latin: super=over) which holds honey which can then be collected.

Starting at the bottom, the hive has a stand to raise the brood box off the ground. The front of the stand often has a landing board for the bees to land on when they return heavy-laden from foraging.

Above the stand is the bottom board. This usually has a mesh floor to allow mites to fall out of the hive. At the front there is a wide gap which is often reduced to a smaller gap by a cleat so that it is easy for defender bees to keep robbers out.

Above the bottom board is the brood box. This is the largest box in the hive and it holds the frames on which the queen will lay the eggs. Some pollen and nectar gets stored here, but most of the cells are left for the young. Nurse bees attend the eggs which develop into larvae and which then pupae. When a beekeeper inspects the hive he takes each frame and lifts it vertically out of the hive. He then examines both sides to see that all is well.

Next is the Queen Excluder. It is a shallow frame holding a number of thick wires parallel to each other. Its function is to keep the queen in the brood box and not let her up into the supers. The wires are wide enough to let a worker pass through but too narrow to let the queen pass. The reason for using this is that beekeepers do not want eggs laid in the supers because some of the honey in the supers is going to be removed.

Above the queen excluder is the first super. There can be up to three. The supers hold smaller frames because when they are full of honey they can be quite heavy. The honey in the supers is the honey that is removed by the beekeeper. Honey in the brood box is left for the bees.

Above the supers is the crown board. The bees recognise the crown board as the top of the hive. There is in fact space above it to help air flow and to hold syrup feeders in the winter.

On the top is the roof - it seals the hive against bad weather. The roof has a metal top because it has to take the brunt of the rainfall, and it is heavy so that it does not blow off in the wind. 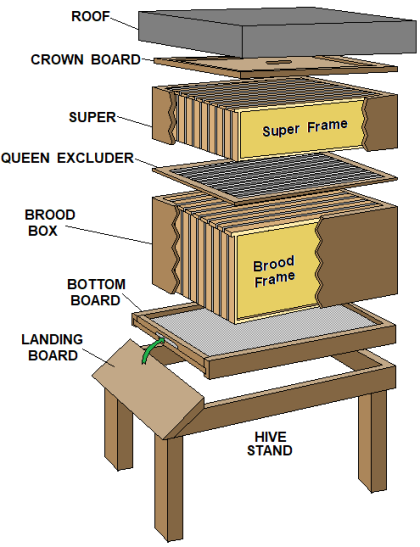